The U.S. shelters a lot of Brazilian Jiu-Jitsu athletes, either competing or teaching the technique. Brazilian Jiu-Jitsu which states that a smaller and weaker person can defend against a stronger and bigger opponent through the use of biomechanics concepts along with proper technique. The success of some of the best Mixed Martial Arts athletes in the world, such as UFC Champions Anderson Silva and Georges St. Pierre to Strikeforce Champions Nick Diaz and Gilbert Melendez who practice Brazilian Jiu-Jitsu has proven it to be one of the most effective martial arts system in the world. Many these athletes teaching in the U.S. are very prominent like Caio Terra, who teaches in San Jose, California. Because of his prominence and following the phenomenal success of the 2013 Pans camp, he is launching the 2013 Mundial Camp. 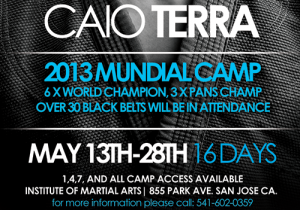 The event will be held from May 13th to May 28th and through the 16 camp days you’ll be able to train in an almost 5,000 sq feet of mat space with almost 30 black belts (estimated) teaching in up to 4 sessions a day, during most of the days. You don’t have to be a competitor to take part in this camp. And regardless of belt, skill level and association, all you have to do is buy your pass to the days you want to participate.

The 2013 Mundial Camp program will include: 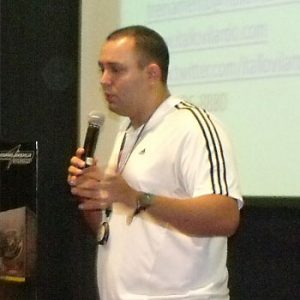 One of the black belts who is confirmed in this camp is the Brazilian trainer Ítallo Vilardo, one of the most notable trainers in Brazil who also trains athletes all over the world, due to his distance training method. This means you can have him periodize your training and send you the spread sheets with specific exercises. He’s trained many Brazilian athletes, including former UFC fighter Pedro “The Rock” Rizzo, Felipe Costa e Raphael Abi-Rihan. Most of his athletes are champions thanks to his effective method of training totally focused on the characteristics of each martial art and the needs of the athletes in each of them. Check out his Youtube Channel to see some of his trainings.

Caio Terra considers him as “the best physical trainer for martial arts”, “the most qualified conditioning coach in the realm of Jiu-Jitsu” and “has a great understanding of conditioning for Jiu-Jitsu, since he’s a whiz in the field and a black belt to boot”.

So, what’s next? You just have to buy your pass for the event, starting from US$50 for 1 session. Guarantee your place with some of the greatest black belts in the world! Buy it here!